Fundraiser for the National MS Society 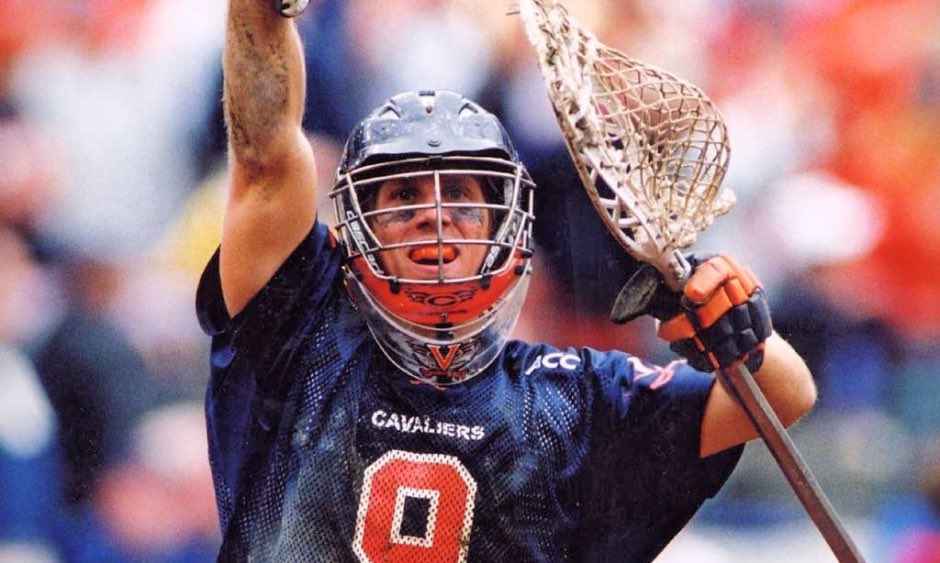 Tillman Johnson showed the lacrosse world the true power of the goalie position.

He inspired an entire generation of lacrosse goalies in the 2003 NCAA national championship tournament when he played lights out, making save after save, pumping up his team, winning the national title for Virginia and earning tournament MVP.

Suddenly middies, attackman, and D all wanted to be the goalie.

So many goalies I interviewed for my podcast mention this performance as the reason they wanted to be THE goalie.

💭 I’ve watched more older film of goalie play the past 3 weeks than my entire life combined...

Tillman Johnson sparked my love for this position and I remember watching him with a stick in my hands in my basement at age 10. I’m having trouble not calling him the best ever.

He trained numerous men and women Division 1 lacrosse goaltenders including:

Here's what PLL Cannon All-Star goalie and Georgetown alum Nick Marrocco had to say about getting goalie coaching from Tillman: 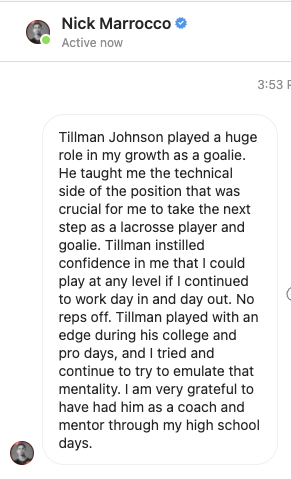 In fact, everyone who trains with Tillman Johnson sings his praises as a goalie coach: 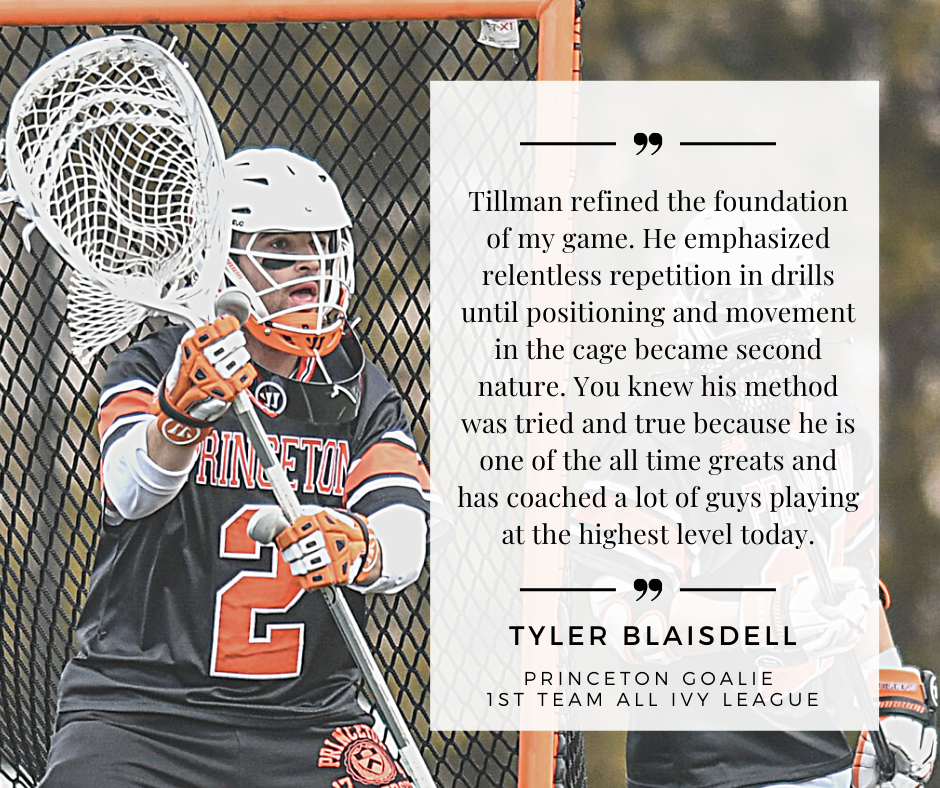 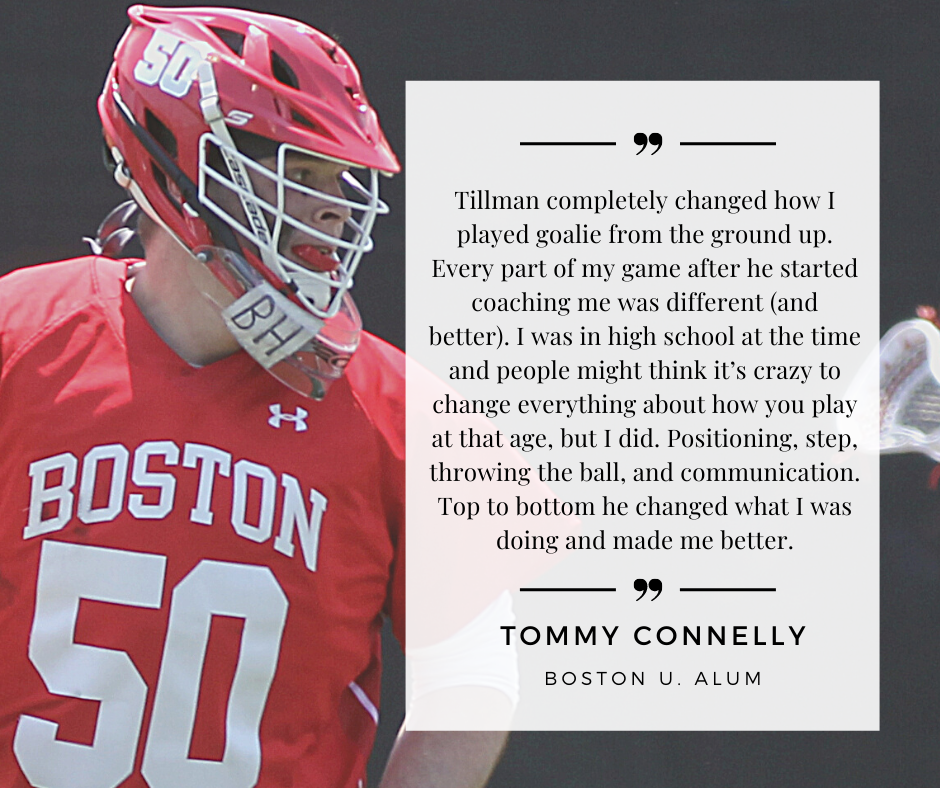 For the first time ever, Coach Tillman Johnson is putting on a virtual mini-camp to teach you his fundamentals.

This is your chance to learn from one of the all time greats in the lacrosse goalie world.

Oops, looks like live sessions already happened. Can I still buy the mini-camp?

Yes, absolutely. You'll get immediate access to the replays plus Tillman's slide deck and videos. If you have a burning question for Tillman, hit me up (damon@laxgoalierat.com) and I'll make sure to get it answered for you.

In 2006, Tillman’s sister was diagnosed with MS. He’s seen first hand the mental and physical pain caused by the disease and helping others fight MS is a cause near and dear to his heart.

1/2 of all proceeds raised from the Tillman Johnson goalie coaching mini-camp will be donated to the National Multiple Sclerosis Society.

If you’d like to make an additional donation to the National MS Society, you can do that when you purchase the Tillman Johnson Mini-camp using this box:

100% of this amount will be donated directly to the National MS Society.

How to get access to the Tillman Johnson Mini-Camp:

For the first time ever Tillman is lifting up the hood to share his trade secrets on what makes a great lacrosse goalie.

These are the same tried and true methods that worked for him and have worked for the goalies he coached playing at the highest levels.

But if you know me, we want to get as many goalies into this training as possible...

Remember, 1/2 of the proceeds go to the National MS Society!

After you buy you’ll receive an email with all the details you need access the replays and Tillman's PPT and videos.

If you cannot afford $49 and want to apply for a scholarship, email: damon@laxgoalierat.com with the subject = Tillman Scholarship and give me your pitch on why you deserve a scholarship.

Also if you can sponsor some goalies to attend, email me: damon@laxgoalierat.com 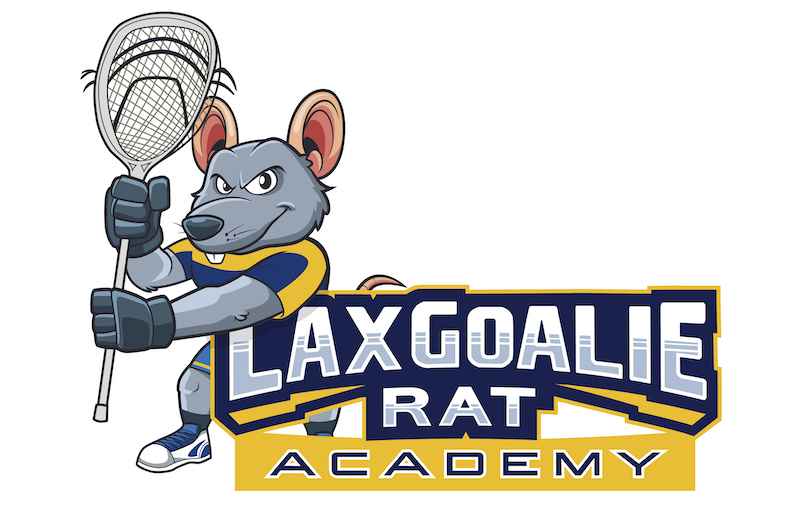 Once you purchase the Tillman Johnson Mini-Camp you’ll have the opportunity to join the Lax Goalie Rat Academy for just $40/month.

Half of the proceeds of these Academy subscriptions will also be donated to the MS Foundation.

The Lax Goalie Rat Academy gives you access to these training videos: 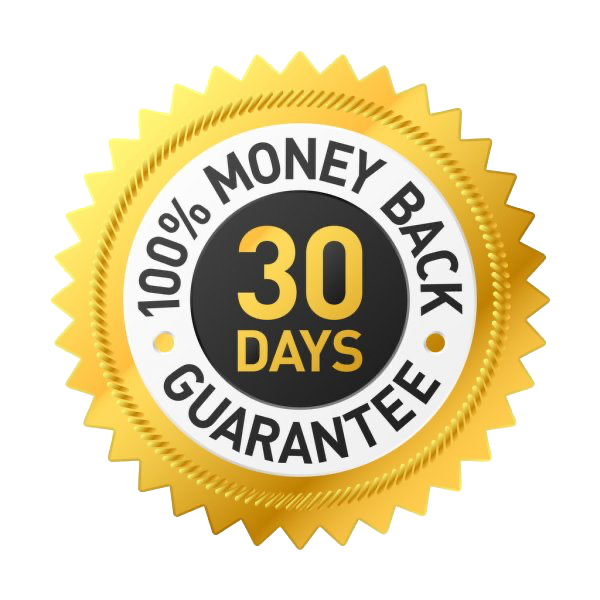 This training has the power to take your goalie's game to a whole new level! That’s not hyperbole — that’s based on results Tillman Johnson has gotten coaching goalies.

Now Tillman is giving us the Lax Goalie Rat community the opportunity to get this elite level lacrosse goalie coaching!

But if you feel like you don't get value from the training, email Team Lax Goalie Rat (help@laxgoalierat.com) within 30 days and we'll give you a refund.

The best part is this:

If you think there's even a 'slight chance' the Tillman Johnson 2-Day Virtual Lacrosse Goalie Coaching Mini-Camp could help out your goalie, you should join!

No guess work needed. Take the training, see for yourself.

And if it works, your goalie will never be the same.

Your goalie will be able to confidently walk onto the field for practice or games, knowing they've taken training from the best college goalies in the game!

Tillman is working his tail off to put together an amazing training session. He stands behind his work.

So that's why we're happy to offer a 30-day money back guarantee. It's really a no-brainer.

Hope to see you on the inside! 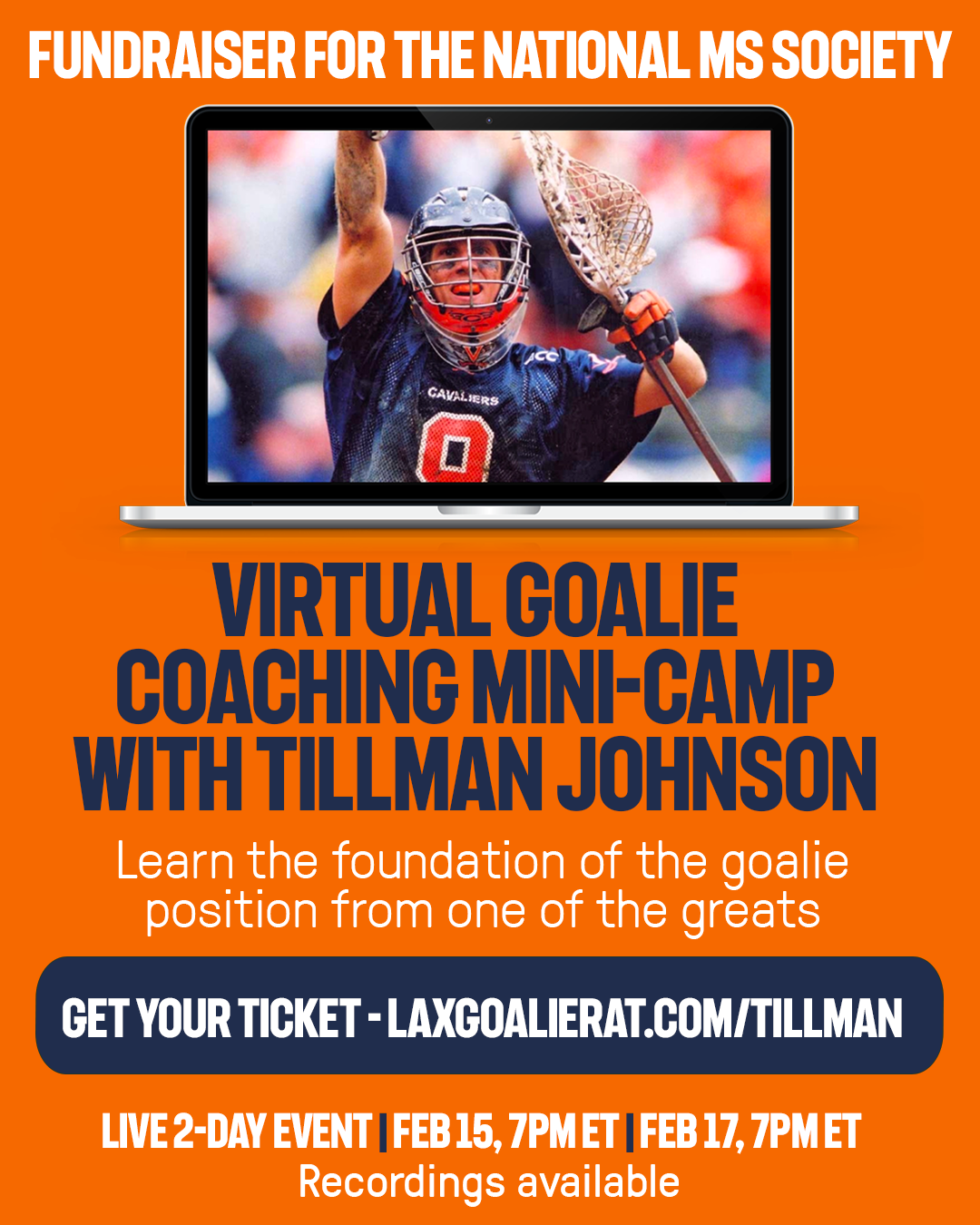